There’s a really good Côte d‘Ivoire chicken place a few kilometres from where I live, in a neighbourhood where I spent a few of my early school years. A few months ago, when my wife and I were picking up our dinner there, we poked our heads into a food centre in the same little strip mall on McArthur Road to see what was on offer. It turns out my wife found tins of delicious Galician mussels and so today I decided to make a trip back to pick up some more.

En route, I passed the Notre Dame Cemetery, one of the two oldest big cemeteries in Ottawa. Traditionally,  it’s the Catholic and French cemetery, where a lot of my ancestors are interred. All of my grandparents, many of my uncles and aunts, even some cousins now. I’ve had trouble finding markers there in the past because I don’t have any maps and I’m relying on thirty and forty year old memories of funerals that always seemed to take place on dark and rainy days. But I recently spoke with a dear aunt of mine and she gave me some direction on how to find my grandmother’s stone, a place I’d not been in possibly forty years. And as my travels were unfolding today, it was becoming clear that it wasn’t so much where I was going to but when I was going to. And the time I was traveling to was 1974.

My grandmother, Lena Rose Macdonald, had a hard life. She had been adopted in a time when adoption usually involved an unwanted pregnancy by a young Catholic girl. She was often ill. She had epilepsy and was prone to seizures. Diagnoses and mental health treatments in those days were unevolved and I think my grandmother probably suffered more than she had to. Lena had eight children and they all loved her dearly, as did her daughters-in -law and her grandchildren, the ones who were old enough to remember her. I was one of the few and I was eight when she died. In 1974.

For my next stop, I cycled to McArthur Road to find my mussels. The store that carries them is called Mario’s Food Centre. Mario’s was the first corner store where I ever bought my own chips with my own money. I think they were probably BBQ and probably cost me a dime. The store was right next door to my school, R.E. Wilson Public school. The tiny school only went up to grade three at the time and I went there for grade one and two. My teachers were Mrs. Ash and Miss Partlow. My first crush was on a girl named Ann. I knew a kid named Stewart who said the word titties at my seventh birthday party, causing my mother to laugh so hard and involuntarily that her Tab came out her nose. And then there was a crew cut-headed kid named Gary who played Smoke on the Water, air guitar style, on his zipper. He also taught me the word fuck. My mother didn’t like him so much but she did laugh at his batting stance when we played fastball because it was so goofy looking. Hands straight above his head, low crouch, knees touching each other. It’s 45 years later and I still remember the batting stance of a seven year old whose older brother liked Deep Purple.

I was the only customer at Mario’s today and I asked the forty-something year old man behind the counter if he was the owner. He was, he said, and I began to tell him about my BBQ chip purchase and it turns out that his uncle was Mario, the Mario who opened the store in 1964. Two generations have owned this little place for well over fifty years. I can’t begin to imagine how those six hundred square feet nurtured three or four generations of one family over more than half a century. All the while feeding the neighbourhood kids all the treats they could hope for. I’m glad I asked him about himself and I could tell he was glad I asked him about himself. Two strangers in an almost empty store shared a hundred words on a quiet Monday afternoon and we both walked away from the experience a little richer. He was born in 1974.

Next, I visited the apartment building where I lived in those days, when I was six and seven years old. I don’t necessarily have great memories of that time because my mother, brother and I moved there only  because that’s when my parents finally separated for good. I was old enough to know what was happening but not old enough to understand it. It’s a strange place for a six year old to be. It wasn’t all bad of course because my aunt Judy (who gave me the cemetery directions) lived across the street and she made the best grilled cheese sandwiches. It’s also where I began to play hockey (Les Plombiers!!!), and it’s where I began to play baseball. It’s where I discovered I was good at math and it’s where I was the Little Drummer Boy in the Christmas Pageant. All in 1974.

I’ve decided I’ll return to Mario’s any time my wife gets a craving for those mussels (I don’t eat them myself) and I’ll think about the days when I could get a Coke and a bag of chips for a quarter and still get a nickel back. And I’ll recall little profane Gary playing that Deep Purple riff on his zipper. And I’ll think of my aunt’s grilled cheese sandwiches.

Nineteen seventy-four might be forty-four years ago, but in reality, it’s only a short bike ride away. 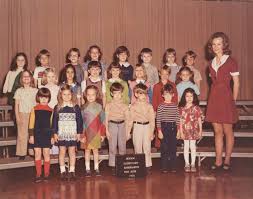