I picked up a few groceries on the way home today and as I headed to the check-out, I surveyed the various cashes. I didn’t qualify for the express lane but each of the five registers that were open only had one customer so I had no concern about missing my bus, which was to be in front of the store in ten minutes. I chose the line that had the fewest items on its conveyor belt but I made the mistake of not looking at the customer who was to be paying for the groceries.

In front of me was an older lady, about seventy-five or eighty, and the debit machine confused her, deeply and repeatedly. She didn’t know her PIN and she’d forgotten which account to use and she timed out a couple of times. When her transaction was seemingly completed (and I felt a sense of relief because I thought I would surely make my bus) she asked for a taxi to be called but she’d forgotten to ask for cash back on her transaction to pay for the cab. The cashier kindly suggested that the lady purchase something inexpensive like one of the chocolate bars on display nearby and the lady agreed. It was then up to me to choose one because I was closest to the rack. I selected a Kit Kat because I knew it was relatively soft, didn’t have nuts that could break a tooth, and it seemed like a chocolate bar an old lady might enjoy. The lady happily accepted my suggestion, completed another transaction slowly and received her money-advance. At that point, I thought I still had a chance at the bus but then the cashier left her post to walk the lady and her groceries to a bench at the front door of the store to await her cab. 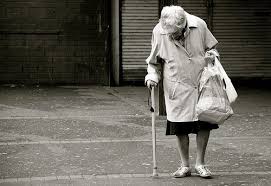 I could feel my patience dissipating as I pictured the bus pulling away from my stop while I stood helplessly awaiting the cashier’s return. But something odd brought me back. Something you would never expect.

While I’d been waiting in line, running out of things to look at, I happened to glance down at my groceries and I noticed the package date of the ham I was about to purchase. April 13th. And immediately I calmed down.

April 13th is a date that has meaning in both of my extended families. It was the day my maternal grandmother was born. Strangely, I think it was also the date on which her mother had been born. And perhaps her grandmother and maybe an aunt and a great aunt also. I’m unsure of the details and I haven’t memorized my family tree but this date is the day on which many of my female ancestors were born. It’s an oddity I’ve always remembered and try to acknowledge. My grandmother died almost forty years ago and I never knew any of the other women who shared this birthday with her but somehow it still means something to me all these years later. My grandmother Mary had ten children, more than forty grandchildren and untold numbers of great- and great-great-grandchildren. She’s someone to be remembered and acknowledged.

On April 13th, forty-four years years ago, my paternal grandmother died. I only have a handful of memories of her and a thin catalog of stories to remember her by but my father was her eldest son and I have love and affection for each of her other seven children who are my uncles and aunts. She had a difficult life. She’d been adopted, likely under circumstances all too common in the 1910’s. She had eight children and fought mental and physical illness for much of her life. My grandfather was a difficult man and my grandmother likely suffered in ways I can’t imagine. I only knew her when I was a young boy and on the day in 1974 when my mother received the phone call delivering the sad news, I held my mother’s free hand. I was eight years old and it was the first time I remember seeing her cry.

As my aunts, my grandmother Lena’s two daughters, have gotten older (much older now than their mother was when she died), I can hear their mother’s laughter in their own. I’m reminded of a voice I’d barely heard and in them I recognize the humour and spirit of the grandmother I almost didn’t know. They’ve kept her alive for me.

As I stood in line trying not to get frustrated by the older lady with the difficult bank card, I thought of my grandmothers, both long gone, and I tried to muster the patience of a grandson tending to his grandmother. An opportunity I wasn’t lucky enough to have had. But with a little imagination, I was a grandson once again.

I did miss my bus. But another came along about ten short minutes later. And for that small inconvenience, I was able to spend some time with my grandmothers. I haven’t seen them in many decades but for just a couple of moments, on this April 13th, I knew the pleasure of their company once more and for that I am grateful.