Today was a day I didn’t particularly enjoy. It was raining hard and it was about as cold as it could be without turning the rain into snow. And I knew I would be spending four to five hours back and forth across the city on the bus.

I took a bus to my barber shop in the morning. After my haircut, I missed my next bus by thirty seconds. So I hung out in a pharmacy for about ten minutes to keep warm until the next one came along. I gravitated toward the magazine rack to see what was up there. My God, the things people buy.

When I got my next bus, downtown, where I would have to transfer yet again, I felt some relief. I wasn’t dressed warmly enough and sometimes relief from the cold can be the best part of the day.

As I got off the bus, at the Rideau Centre, the downtown mall, I experienced an odd and compressed variety of feelings. It’s a rough part of town. I saw more than one person without any legs and it seemed like every fourth person had mobility problems. And everyone seemed to smoke.

But the nice thing to see was that most of the most vulnerable among us seemed to be well-supported by the rest of us. Courtesy, patience, understanding, it seemed to be plentiful.

When I got off the bus, right behind me I heard a verbal fight break out. It seemed one guy was trying to help a young woman off the bus and another guy was being impatient about it and the F-bombs started flying. At first, I was on the side of the guy who claimed he was helping the woman but then he dropped the real bomb. He called the other guy a fucking immigrant. In the space of five seconds, I went from feeling for his chivalry to thinking he was a scumbag. It deflated me.

When I got on my next bus, a down and out woman put her pass card up against the monitor and it said insufficient funds. And a stranger right next to her scanned his own card for her to get her on the bus. And I felt better about things for a few minutes. Genuine, unsolicited kindness.

I got caught up on my phone and I missed my next stop, being unfamiliar with this bus route. I had to walk back a few extra blocks but it afforded me the opportunity to come across a few people walking their dogs. I don’t have the energy to be a dog owner anymore but I can’t help but notice that dog walkers seem to exude a certain kind of serenity. Maybe it’s the kind of companionship that doesn’t require conversation all the time. That might be it.

When I completed my task at a government office and headed back to the bus stop, I was cold again and couldn’t wait to get back on the bus. That was misguided. There was an older man on the bus. He had few teeth and he was drunk. And he didn’t stop a yelling monologue for the twenty minutes we shared the bus. He railed against everyone and everything and I vacillated between feeling bothered by him and feeling sorry for him four or five times in any given minute. I’ll likely never see him again but the way I felt about the situation isn’t going away. I wish him luck.

I got off the bus once more to get some groceries. It was my intention to buy a pumpkin as well. A small one to carve that afternoon for the trick-or-treaters that night. But the store only had large, white pumpkins and so I didn’t bother. I was reminded of the days when we lived downtown, without a car. When we considered the weight of things when we shopped. It’s easy to get spoiled and forget some of the simple challenges others might face.

I got my last bus for home with two full and heavy grocery bags. The next day, I felt sore. I rode five buses over about five hours. I saw some ugly and I saw some beauty.

And while I don’t pretend to enjoy riding the bus, I can’t help but think you can learn a lot of important lessons about the world from the seat of a city bus. 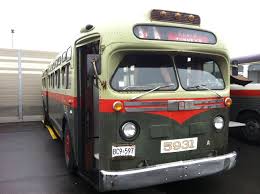