In the last few years of political tumult, I’ve been drawn to historical commentary and political philosophies of yesteryear. What has been a revelation is how little of it is new. All the cliches have become cliches for a reason. Nuance needs to be considered, as always, but the lines we’ve all heard for most of our lives really do map out all we need to know about what is happening today.

A few of them are here.

No one ever went broke underestimating the intelligence of the American public – H.L. Menken

There comes a time when one must take a position that is neither safe, nor politic, nor popular, but he must take it because conscience tells him it is right – M.L.K.

It goes on and on. From the Ancient Greeks to the biblical texts, from the industrialists of the nineteenth century to the activists of the 1960s. In literature and in song, in comedy and in film. There’s little that can be said or written today that hasn’t been said or written before.

All the old tricks still work because we, as people, do not learn. Or if we’re forced to learn because our families and towns and nations have been devastated by catastrophic war or recession or depression, we willingly forget those lessons within a few generations because we want to believe the lies. Because the lies promise an easier path to prosperity than does the truth.

Why else would poor people applaud tax cuts that make the rich richer and the poor poorer?

Why would poor people proudly die in foreign lands fighting other poor people so that their masters may profit?

Why would people who profess to be righteous and moral, gladly suffer and then die for the most immoral of human behaviors?

Why would self-professed Christians support a leadership who behaves contrary to every teaching of Jesus Christ himself?

I don’t know why in every case. It’s complicated and beyond my understanding. But it seems clear that George Orwell was right. War is peace, freedom is slavery and ignorance is strength. 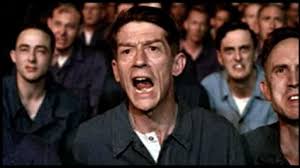 It’s not really that those things are true. But it is easier than any of us might ever have believed to make them seem true.

It boggles my mind.

Perhaps that truth will be rediscovered. It shows its head periodically but somehow it never escapes the darkness of the deepest of caves for very long. But it’s still there. Waiting for the light.