I needed a few things at an office supply store the other day and with the weather being good, I decided to ride my bike the few kilometres to the strip mall. I was able to take a bike path along a parkway for the first leg of the trip but about halfway there I had to leave the pretty scenery and return to the streets to get to the store. I thought I could find a shortcut from the parkway but I quickly got lost and ended up in a residential area that in another era would have been called a housing project.

The garden homes were modestly sized, unkempt and in bad need of some fresh paint. There were large piles of garbage here and there and discarded pieces of furniture sat on more than one corner. As I manuevered between several well-loaded clothes lines I saw a deflated and abandoned soccer ball laying in the sand at the bottom of the slide in the park. 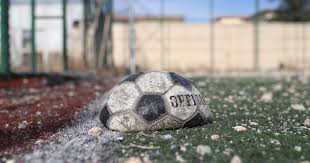 My first instinct was to feel sorry for the kids who had to play in the shabby playground and I assumed that the people who lived in this neighbourhood would probably rather live some where else.

I didn’t grow up in that neighbourhood but I grew up in some that didn’t look too different from it. When I was three years old and playing in a similarly humble playground, I didn’t think of myself as poor. Why would I? I was playing with my friends or my mum and I was doing fun things. I was safe and I was fed and I was loved. Why would I feel poor?

My mother and her neighbours didn’t live in their rented town houses for twenty or thirty years because they couldn’t move somewhere else. They liked where they lived. They liked their homes, however modest, and buildings that may have looked run-down from the outside, were welcoming on the inside.

I did eventually get to the store to buy my ink jets and a day planner and when I asked the young clerk about a particular product, I was informed that they used to sell it “a really long time ago”. And that what I thought I needed had been discontinued for ten or fifteen years. It was another reminder that I had become one of those people who was easy to make assumptions about because I’m a little older and a little out of touch, technologically speaking.

I, who was once a student in one of the first ever computer science classes offered in my high school, had become a luddite.

After I left the store and was in the parking lot, a guy about my age walked by and remarked that he liked my bike. It’s not fancy or expensive but it’s fairly new and brightly coloured. I thanked him and said it wasn’t anything special. He said, “it sure beats the hell out of walking”. Perspective.

The next day I was riding through a decidedly more affluent neighbourhood and I came across a group of jogging teenage boys from Ashbury College, the costly private school in my part of town. They wore their school colours and had expensive haircuts and the right shoes. I remembered the “Ashbury Runners” from my youth and recalled how my friends and I had always been a little disdainfully jealous of their wealth. Looking back, those rich kids likely had little choice about which school they attended and had no input into how wealthy their parents were. Just as I had no choice or input about these things in my own life. My childhood resentment, perhaps understandable at the time, was wholly misdirected.

These running kids paid no attention to me but I couldn’t help but wonder what they may have thought if they had. Would they have seen a middle-aged man who was able to retire at the age of fifty and was free to take a leisurely bike ride in the middle of a work day? Or would they have seen an unemployed middle-aged man who was riding his bike to the grocery store because he’d forgotten to reload his bus pass for the new month? I suspect I know the answer but they would have been making assumptions in either case.

When I was a child on the playground, I didn’t feel poor. That didn’t come until years later when I allowed myself to feel poor. Later in life, particularly in the last few years, I’ve come to happily accept that I am a man of great wealth despite what my banker might think. But in the space of twenty-four hours, and within a three kilometre radius of my home, I allowed myself to feel either rich or poor for misguided reasons. I let my perception of my personal wealth be determined by what I saw in front of me rather than by what I felt inside of me. One of these things I can control and one of these things I can’t. Perhaps knowing the difference is the source of life’s true richness.